3 Things You Can Do Today to Start Feeling Younger 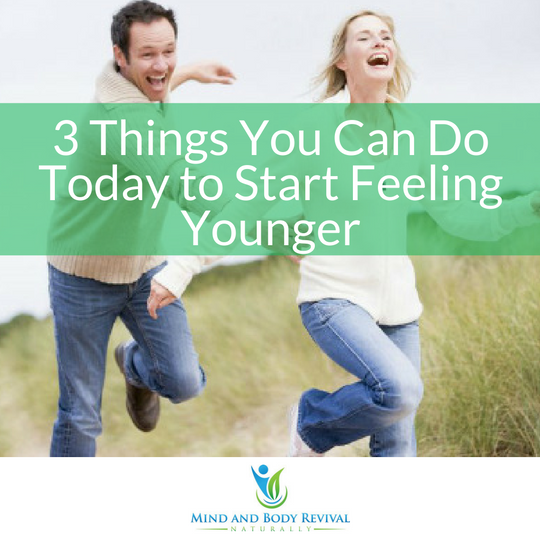 Are you feeling older than you should?  Maybe you’ve noticed your energy level isn’t quite what you’d like it to be or that you’re getting aches and pains you never used to have.

Well don’t worry; it’s not inevitable that this should happen as you get older.  There are some simple things you can do to reverse these effects and start feeling younger.

Perhaps you’re not active enough.  If you sit a lot start making it a point to move more because sitting for more than 6 hours a day will cause you to live a shorter life.  Yes, there’s research that proves it!

Even just a few minutes of stretching and exercise regularly throughout your day will make a huge difference in improving your circulation.  In turn, your cells will get more vital nutrients and oxygen, and toxic waste will be flushed away.

Look, the old myths that you need to do hours of cardio exercise and use those complicated formulas for getting your heart rate into the right zone are busted.  You absolutely don’t need to go to a gym and slave for hours to get the benefits of exercise.  Going to the gym is such an inefficient use of your time because gym equipment only works a few groups of muscles at a time.

You’re far better to pick some great body weight exercises and do short bursts of those which will get your heart working harder while strengthening and toning all the major muscle groups in your body. Yoga exercises are a great example.

Maintaining a good level of muscle mass is important for healthy aging too because it boosts your metabolism and helps keep your blood glucose and fat levels in their normal ranges.  Too little muscle causes weight gain, blood sugar and fat changes, and accelerates all the chronic illnesses usually associated with aging.

It’s never too late to start exercising!   Research with men in their eighties who just started doing resistance (strength) training showed that even at their age they were able to get dramatic improvements in all their blood test results.  Not only that, they reported feeling heaps better too!

Other benefits of exercise include being able to better withstand stress, improved sleep and moods.

Sleep isn’t negotiable if you want to feel healthy as you get older!  Why?  During sleep your body is in rest and repair mode.  It gets rid of the toxic waste your cells have produced during the daytime, builds and repairs your tissues.

Lack of sleep results in a toxic body, which itself causes tiredness and fatigue and pushes your stress hormones up.  Research has shown that lack of sleep causes your stress hormone cortisol to go up by as much as 30%!  Having a high level of cortisol results in other hormone imbalances, muscle breakdown and a suppressed immune system which in turn leads to more frequent infections, autoimmune disease and cancer.

Our bodies run on a clock based on night and day, called the circadian rhythm.  We are designed to go to sleep when the sun goes down and wake up when the sun rises.  This body clock regulates all our chemical messengers; our hormones.

Our hormones also fluctuate depending on the seasons.  In the past, long summer days caused higher levels of appetite hormones to increase fat stores for survival through winter when there wasn’t enough food around.  With the invention of light globes this whole body clock has been disrupted and today our bodies perceive every day as a summer day.

When you get too little sleep you’ll eat more while awake but will also be looking for sweets and stimulants like caffeine and nicotine as energy boosters because you’re tired.

Aim to be in bed by 9.30 – 10pm and get at least 7 but preferably 8 hours sleep each night.  You’ll be pleasantly surprised what a difference it makes to your general wellbeing, energy, moods, achey joints and muscles.

Actually I suggest you do a 3 week gluten-free trial.  Gluten is found in wheat, oats, barley, rye, spelt and triticale but wheat is the biggest culprit.  Chances are, you’re eating wheat throughout your day without realising it’s what’s making you feel tired, depressed, anxious, sluggish and bloated.

Now believe me, I do know what a tough call this might seem.  You see, bread and cheese were always my 2 favourite foods.  Twelve years ago when I started studying naturopathy and was told I needed to stop eating both I thought to myself “Yeh, right, it’s never going to happen!”

It took me a long time to accept the fact despite suffering with irritable bowel syndrome but eventually after cutting down on wheat over the years I’ve now been strictly gluten-free for over a year.

I have to say it’s made a big difference just eliminating the very small amount of wheat I was consuming the five or so years before I quit completely.  My lower back is no longer stiff like it used to be when I had been sitting for awhile and I virtually don’t notice the arthritis in my hands and knees anymore.  Compared with even just a couple of years ago I can honestly say I have way less aches and pains.

So what have you got to lose?  Really, it’s not that hard and at the end of 3 weeks if you haven’t noticed any improvements in how you’re feeling then have a good dose of bread and pasta and see what happens.  Your body will soon tell you!

I’ve had clients who have had amazing results after eliminating gluten from their diet and know now that the price they pay for eating these foods just isn’t worth it.  Their debilitating pain, low moods, depression, anxiety and gut symptoms just disappeared.  But until they strictly eliminated foods containing gluten for a few weeks they had no idea those foods were to blame.

Now it’s understandable that you might still be feeling sceptical and if so, then I suggest you do your own research.  A couple of great books are “Wheat Belly” by Dr William Davis and “Grain Brain” by Dr David Perlmutter.  Dr Davis is a cardiologist and Dr Perlmutter is a neurologist.  Both these doctors have seen miraculous recoveries in their patients from all sorts of conditions by getting them on a gluten-free diet.

And keep an eye out for another post from me soon on the pitfalls of gluten-free diets.