Busting the Myths & Misconceptions Around Hypnosis 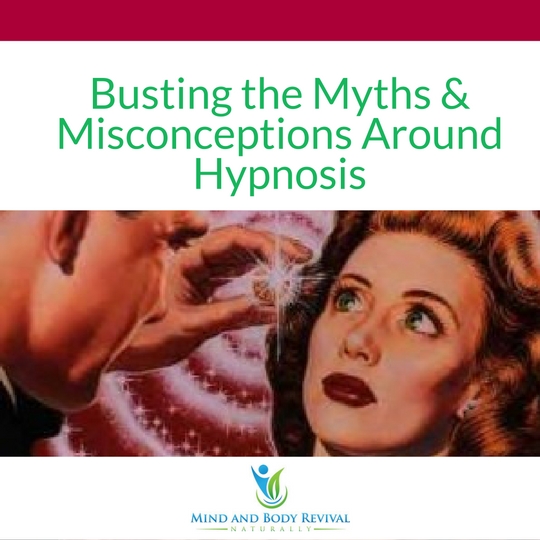 Sometimes when I mention the word hypnosis, it seems to strike fear into the hearts of some people. That’s because even today, there are still lots of myths and misconceptions around hypnosis. In this article, you’ll learn all the truth, nothing but the truth…

The first big myth is that hypnosis is mind control and that you can be made to do something that you don’t want to do. Well, it’s not mind control and I can’t make anyone do anything against their will or moral judgment, give away secrets or a PIN and neither can any other hypnotist.

And this myth is largely a result of the stage shows which are for entertainment. And the kind of people that volunteer to get up for these shows are exhibitionists or are half cut, and they don’t mind making a fool of themselves, and having some fun at the same time.

Because really, when you think about it, why would you volunteer for something like that when most people’s number one fear is public speaking, and making a fool of themselves in public? The tests that the hypnotists do for those shows are really just filtering out the people who are less suggestible. They want the ones that are going to do as they’re told, because after all it won’t make for a very good show if people don’t.

Hypnosis is for The Weak-Minded

The second big myth is that hypnosis is for the weak-minded. Some people think, “I’m strong-willed and I can’t be hypnotised.” And what this assumes is that the hypnotherapist is working against them; is going to try and make them do something they don’t want to do. Well, I don’t know any hypnotherapist out there who isn’t there to help their clients achieve their goals.

Helping my clients get what they want in their life is what motivates me, and it gives me great satisfaction, knowing that I’m helping them to enjoy a happier and healthier life.

You Can Get Stuck In Hypnosis

And the people who don’t come out of hypnosis straight away are simply enjoying the deep state of relaxation that they’re in, and they just want to stay feeling that way for a bit longer.

Most of the time while a client is in hypnosis the hypnotist is talking to them. If the hypnotist stops talking, they’ll get bored and they’ll simply come out of it after a few minutes or so or maybe go off to sleep.

Another myth about hypnosis is that it’s magic. It’s almost as if people expect that I have a magic fairy wand, that I’m going to wave it over them and turn them into a non-smoker, or that the weight is just going to fall off them, just like that in one session.

A successful hypnosis session requires that the person be committed to achieving the desired result, because they really want it, and they need to participate in the whole process of hypnosis: by following my instructions throughout, liking, and wanting the suggestions to work. And they’re all safe and sensible suggestions.

These are some of the most common myths or beliefs.

What Hypnosis Actually Is

It’s basically just a different state of mind to what you are in now, as you’re reading  this. One of the most well-known hypnotists of the 20th century, Dave Elman, described hypnosis as a bit like a mood. Just like a state of mind, you can change your moods.

It feels very much like that feeling you would have as you wake up in the morning like  on a day when you don’t have to rush off to work, and you’re lying there in bed half-awake, half-asleep, feeling very relaxed, or very much like that feeling that you have, as you’re going off to sleep at night. It’s a bit like the state between being awake and asleep, but you’re not asleep and you’re not zonked out.

About 95% or more of my clients have never been hypnotised when they first come to see me. So we talk about hypnosis, and then of course, we do the hypnosis session. And many of those people are completely blown away by how relaxed they’ve actually felt during the session.