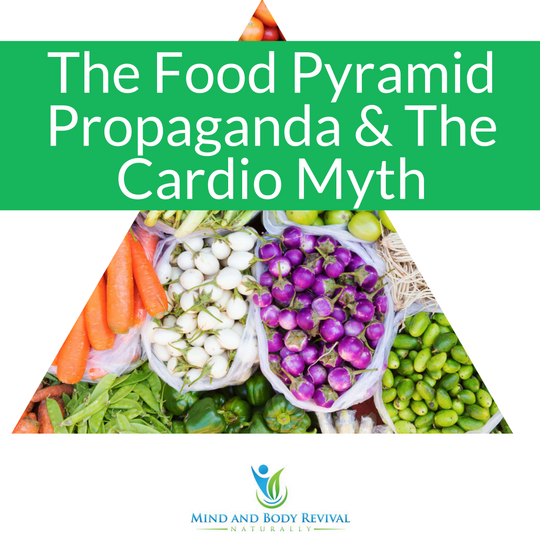 Since the introduction of the food pyramid, whole grains and grains, and foods made from grains, have become a huge proportion of most people diets. So we’re talking about products made from wheat, particularly.

The food pyramid really was never based on any traditional human diet or really on any science. In fact, the food pyramid as it is today is what the food industry lobbied for. Since the introduction of the food pyramid, we’ve had more and more people who have become overweight, and who have diabetes.

In fact, in all Western countries now, pretty much, but particularly the US, Canada and Australia we have an epidemic of obesity and diabetes. While it can’t be completely blamed on the food pyramid, as a naturopath, I strongly believe that much of the blame can be put on the food pyramid.

The food pyramid has not only promoted grains and products made from grains, but it’s also made people fat-phobic. And when you take the fat out of food, you need to put something else in to make it taste good.

Since about 1900 the food industry has known that sugar is quite addictive. And if you put sugar in foods people will eat more and want more of them. So the food pyramid really has by taking fat out of people’s diets created people who are craving carbohydrate and refined carbohydrate.

The health of the gut can also have a role to play here, too. But the modern-day diet, certainly doesn’t promote health, and it is guaranteed to push people more towards gaining weight, and have difficulty losing it. Many of the popular diets out there still ignore the effect that a lot of the so-called healthy foods have on insulin and the other hormones in the body.  Insulin is one of the main hormones that regulates how much fat your body stores.

There’s absolutely no reason that you have to starve yourself to lose weight. It’s not about calories in/calories out; – it’s much more complicated than that.  What’s most important is eating the kinds of foods that are going to help your body to burn fat, as opposed to sending those hormonal messages that tell your body to store fat, and to hang onto it.

Long periods of cardio, particularly where you’re standing on a treadmill, or even sitting on a bike, or working on a cross-trainer or whatever; where you’re doing the same intensity workout for long periods of time really actually has the effect of wearing  your joints out much earlier, of breaking down your muscle and it sends the wrong hormonal messages to your body.

And a lot of these traditional weight-loss diets that people have been following, which are calories in/calories out based people are actually causing muscle loss, which then is one of the major triggers for the rebound weight gain afterward you stop dieting.

So sometimes while they look like they’ve lost weight on scales when I do a cellular health analysis on a client they’ve lost muscle – and as an example, I remember a client coming in a couple of years ago:

At her second visit, she came back and she was over the moon.  She said “I got myself a personal trainer, and I’ve been training five days a week at the gym and I’ve lost four kilos.” And when I actually did the cellular health analysis with her, she’d only actually lost two kilos of fat, but she’d also lost two kilos of muscle.  The problem was, she was still eating the wrong kinds of foods.

So this is where we need to pay careful attention to what kind of exercise people are doing, how much they are doing, and what they’re actually eating, because what you eat also influences whether you build or lose muscle.