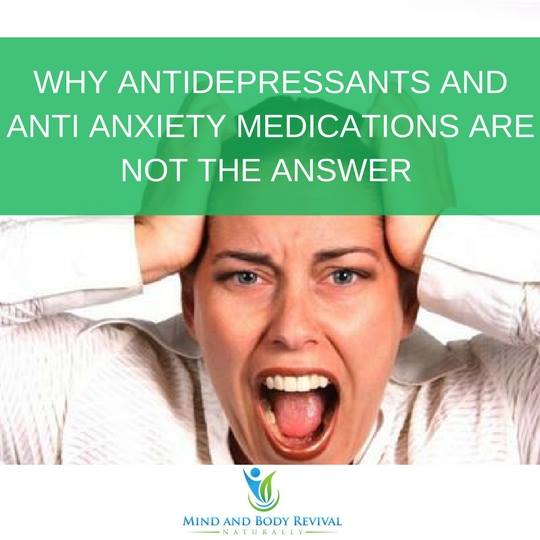 It never ceases to astound me at how many people today are taking antidepressant or anti-anxiety medications.  Now please don’t get me wrong!  This is not meant as a judgement against you or anyone else taking these sorts of medications.  I’ve taken them myself in the past too before I knew what I know now.

So what’s the problem here you’re probably wondering?  Well firstly, this whole approach assumes that you’re broken and secondly  that your body doesn’t know how to fix itself, but rather it’s deficient in a drug!

How we’ve been mislead!  You see, for millions of years humans had faith in their bodies to heal and they used nature to assist the process with certain foods and particularly plants.  Now you might say this is just like using a prescribed drug, but it’s not!

So what’s the difference?

Well pharmaceutical drugs have been patented to make big fat profits for the companies that developed them and you can’t patent something that occurs naturally in the environment (though there are a few companies that are trying!)

Your body knows perfectly well how to heal, repair and restore when given the right conditions.  You’ve seen it for yourself many times like when you injured yourself or had surgery.  Your body just set about healing immediately, without any further instructions from you or anyone else!  It just did it and it continued until the healing was done.

Physical healing is a little different of course from mental and emotional healing but in many ways it’s the same.  Your body knows how to maintain perfect balance when it comes to your neurotransmitters, or nervous system messengers, but for whatever reason they’ve become disrupted.

And your stress symptoms, anxiety and depression are like the flashing light on your dash warning your that your engine is overheating.  You know when you see that light you need to do something about it – immediately!

But you haven’t been paying attention and it’s like you’ve continued driving while that light continues to flash.  Of course if you keep going your engine will blow up and then you won’t be going anywhere!

This just goes to prove really how incredible our bodies are that they actually continue to keep us functioning despite such abuse.  But everything comes at a price and if you continue to keep pushing yourself to do more while neglecting your body’s needs for sleep, rest and play you will eventually suffer with the effects of chronic stress.

Anxiety and depression are two of the most common conditions associated with ongoing, unmanaged stress.  Unfortunately the most common treatment offered is medication and it’s possible you self-medicate with alcohol, emotional eating or have other addictive behaviours.

Apart from the risk of side-effects with these drugs, some of which can be very serious, is that they aren’t helping you to change how you cope with your stress.  Your health will get worse because your biochemistry becomes further imbalanced – chemical messengers including hormones, neurotransmitters and immune system messengers continue to be affected by chronic stress, throwing everything into chaos.

And long term use of antidepressant and other psychiatric drugs can also lead to depletion in the very same neurotransmitter or neurotransmitters they were supposed to be boosting, as your body shuts down its own production.  (These chemical messengers are normally found in parts per million and your body wants to control their levels very tightly).

Many people also find antidepressants cause them to feel flat mood-wise because while the drug takes away the low feelings it can also take away the high feelings.

Serious weight gain is a common side-effect of antidepressant drugs too because of increased appetite or hormone imbalances caused by these drugs.

Worse still benzodiazepines commonly prescribed for anxiety are well known to be particularly addictive according to Professor Malcolm H Lader, Professor of Clinical Psychopharmacology at the Institute of Psychiatry, King’s College and University of London, UK.

In a radio interview in 1999 Professor Lader said:

“It is more difficult to withdraw people from benzodiazepines than it is from heroin. It just seems that the dependency is so ingrained and the withdrawal symptoms you get are so intolerable that people have a great deal of problem coming off. The other aspect is that with heroin, usually the withdrawal is over within a week or so. With benzodiazepines, a proportion of patients go on to long term withdrawal and they have very unpleasant symptoms for month after month, and I get letters from people saying you can go on for two years or more. Some of the tranquilliser groups can document people who still have symptoms ten years after stopping.”

“We knew from the start that patients taking markedly increased doses could get dependent, but thought only addictive personalities could become dependent and that true addiction was unusual. We got that wrong. What we didn’t know, but know now, is that even people taking therapeutic doses can become dependent.”

Now I don’t know about you but I find this frightening!

So what’s the answer?

Well, learning to reduce and manage your stress would surely seem a logical answer.  And understanding a little more about how your body works so you can work with it to restore the balance naturally, without unwanted side-effects might be another, don’t you think?

And the beautiful thing about working this way to restore your mental and emotional health is that you’re going to notice so many other positive benefits like better energy, motivation, libido, being able to control your weight, better gut health and more!