Why the biggest loser drives me crazy 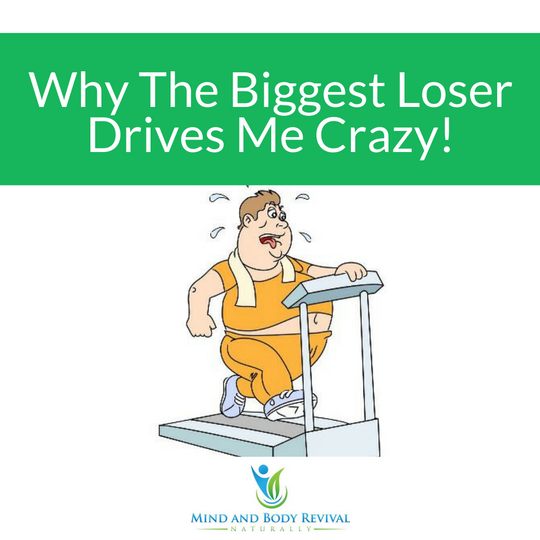 08 Oct Why the biggest loser drives me crazy

Each new season of The Biggest Loser drives me crazy!  Why?  Well firstly because it makes me angry seeing people who are clearly extremely unfit being put through ridiculously dangerous exercise routines that even a super fit person would struggle with.  It’s just insane doing that to someone – even if you don’t know much about exercise or health, you’d instinctively know it’s just plain stupid!

Exercise does not have to take many hours a week or kill you!

And what’s worse is that it goes against current research about exercise for fat loss and continues to perpetuate the old myth that you have to do hours of gruelling exercise to be able to lose weight.  How off-putting is that, especially if you want to lose weight and haven’t done any physical activity for awhile, thinking this is the only way?  You might even give up on the thought of being able to become slim again because it all just seems too hard.  Well let me tell you right now, it doesn’t have to be that way at all!

Your Weight Does Not Equal Your Self-Worth!

Another reason the show makes me angry is because it reinforces the idea that until you’re slim you’re not good enough.  It ties weight to self-worth.  This is not helpful because until you learn to love yourself first, you’re never going to take care of your body enough to restore your health and become slim.

It’s not about the Calories!

And that brings me to my next point which I’ve harped on about before.  It’s not about the freaking calories!  The whole idea promoted in this show is so outdated because it’s based on the eat less, exercise more, low fat approach which doesn’t work long term and sets you up for rebound weight gain!  It’s working against your body’s natural biochemistry, which is why that old approach requires so much will-power.

Will-power is a finite thing – you only have so much, which is also why so many people on the program end up failing, especially when they try to follow the program at home.  That in turn sets them up to feel even worse about themselves.

And my final gripe about the program is that the only way they track peoples’ progress is by weighing them.  The big flaw with this is that when you start to exercise more, especially weight-bearing exercise, you not only increase muscle mass but you also increase your bone density.

If for example, you didn’t burn any fat while doing weight-bearing exercise, your weight would actually increase significantly, because muscle and bone are very dense, so they weigh a lot.  But if you were burning fat, and were gaining muscle and increasing bone density at the same time, the fat loss would be masked by the muscle and bone increases.  This means you might not see much of a shift downwards, or even any shift on the scales, but you are actually burning fat.

I’ve seen people who have almost given up on ever losing weight before they came to see me and as a result of not seeing the scales move, have cut their calories even more, only to find nothing changes.  This is disastrous because simply restricting your calorie intake too much, as most dieters are doing, is signalling to your body that there’s a famine, and your body’s natural response is to slow your metabolism down.  The end result is that you burn less energy, including fat, doing exactly the same things you were doing before!  And, it makes it harder to maintain your weight, let alone lose it!

Not to mention that calorie restriction is a big stress on your body that sends your stress hormones sky high and reinforces the message to your body to store fat instead of burning it!

Many of my new clients have been surprised when I’ve told them to eat more!  The reason is that it will tell your body the famine is over, and your metabolism can begin to increase again. But it’s crucial to eat the right foods!

I also help my clients to understand their bodies better.  One of the most important things to understand when it comes to fat loss is that it doesn’t matter what you do, you have to work on becoming healthy first.  Why? Because it’s your hormones, or chemical messengers that dictate whether your body stores or burns fat.

You need to get those hormones back into balance by focussing on getting healthy, instead of focussing on cutting calories or losing weight, and when you do, your body will naturally return you to a healthy weight because it instinctively knows how to do that.  I mean, have you ever seen an overweight animal in the wild?  No, of course not!

Your Body Knows How to Maintain Your Healthy Weight!

And we are not naturally overweight.  The only reason we become overweight is due to things we do and what we eat, including many so-called “healthy” foods that cause hormone disturbances.  When you focus on eating for health and living a healthier lifestyle with reasonable, not ridiculous amounts of activity, your body will naturally become slim again without you having to count calories or starve yourself.

If you’d like to have a chat about how I can help you become the naturally slim, healthy you without the starvation, deprivation and misery, simply call me today on 1300 599 872.